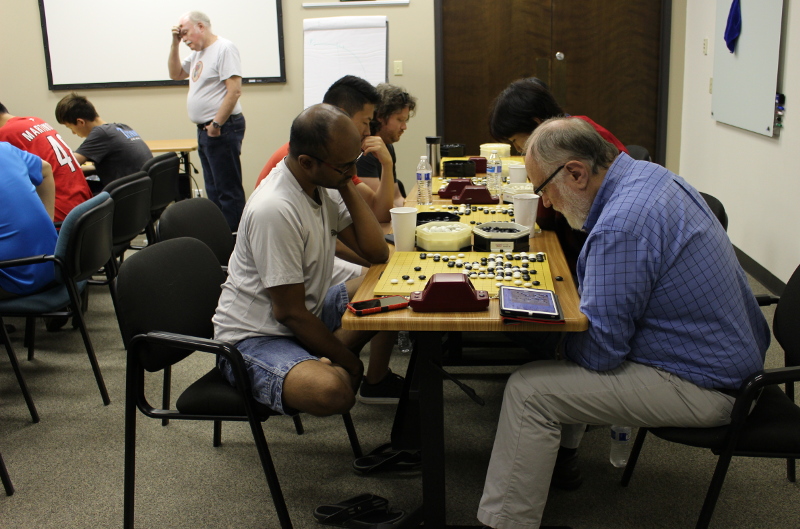 24 Go players enjoyed stimulating competition in the North Carolina Annual Spring tournament on Sunday, May 19th. After 4 rounds of well matched games the following winners were noted: in the top band, Jeff Kuang won all of his games and claimed the otp prize; second place was a tie between Ji Wen and Haixin Yang, each with a 3 win 1 loss record and identical SOS scores. Band 2 was won by Tao Ma with a 3-1 record; Charles Alden placed second with a 2-2 performance and the highest SOS score, edging out the other 2-2 winners in that section, Jim Conyngham and Justin Blank. Russell Herman was the clear winner in Band 3 with the only other perfect 4-0 record of the day, and Will Daland claimed 2nd place as his SOS score placed him slightly higher than the other 2-2 performers, Ganning Xu, Dale Blann and Bhaskar Bharath. John Schollenberger won 3 of 4 games to lead the pack in Band 4, with Sky Wang placing second. The tournament was attended by many supportive parents, and we greatly appreciate their support. Jeff Kuang was the Tournament Director. Lunch was provided onsite by the Triangle Go Group. The beautiful playing area was provided courtesy of Triangle Go Group member Dale Blann. Thank you, Jeff and Dale!

More photos from this event are available on the Triangle Go Group photo page. In the below tables, komi is listed as 7 and 0, representing 7.5 and 0.5 respectively. Winners appear in bold.