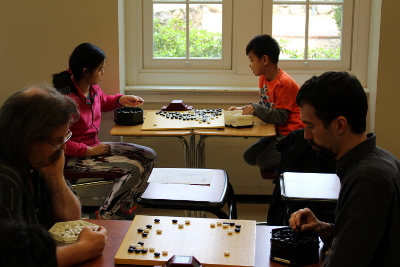 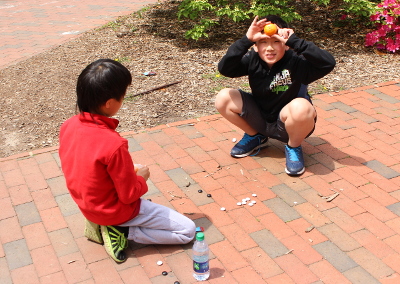 38 Go players participated in the North Carolina Annual Spring tournament on Sunday, April 22nd. It was a beautiful sunny day on the UNC campus in Chapel Hill, and after 4 rounds of intense competition the following winners were noted: in the top band, perennial champion Eric Zhang won all of his games; second place was a tie between Brian Wu and Suyoung Yoon. Band 2 was won by Tao Ma with another 4-0 record; Paul Celmer placed second. There was a 3 way tie for first place in Band 3, with Eric Tillberg, Harrison Pedigo and Tom Roncoli each achieving a 3-1 record. Raul Crisan won all 4 of his games to lead the pack in Band 4, with Justin Su and Ganning Xu placing second. Band 5 was handily won by Ajay Dheeraj, with another perfect 4-0 record; Annie Yuan and John Schollenberger tied for second, and Sophia Yang was 3rd. The local Go community was encouraged by the many first and second time tournament participants. The tournament was attended by many supportive parents and one special guest, local Professional Ying Shen 2P. Ying Shen 2P offered suggestions and encouragement to many of the participants, and her presence was greatly appreciated. Jeff Kuang was the Tournament Director. Lunch was provided onsite by the Triangle Go Group. The site was arranged by the Cary Go Club.

More photos from this event are available on the Triangle Go Group photo page. In the below tables, komi is listed as 7 and 0, representing 7.5 and 0.5 respectively. Winners appear in bold.