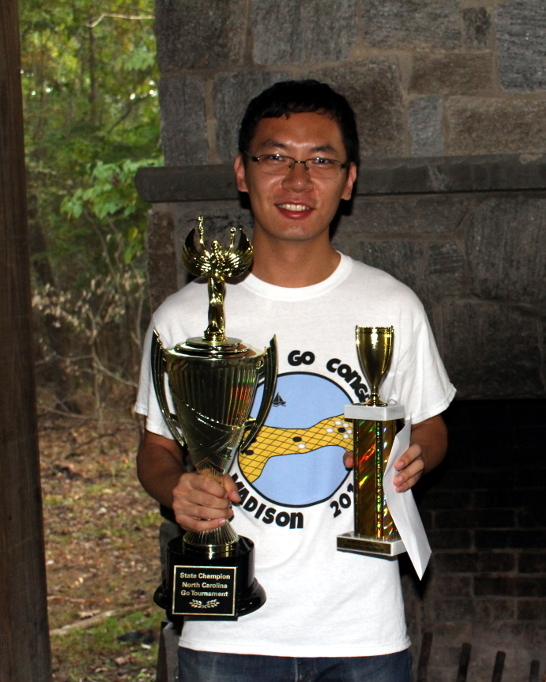 For the second year running, Chen An 7 Dan won the North Carolina State Championship with a perfect 4 win 0 loss record. He faced strong competition this year from another 7 Dan, Chengyu Fu, who placed a very respectable second place in the event. The Open Section was quite competitive this year with two 7 Dans, a strong 5 Dan, two powerful 4 Dans and four battling 3 Dans.

The weather was warm in Raleigh, and the atmosphere was on fire as 25 players engaged in their favorite board game. Tournament Director Jeff Kuang ran the show smoothly and pairings appeared quickly. A sumptuous lunch was again provided by Arlene and Adam Bridges.

Section A ended with a tie between Chen Yuan 2 Dan and Sheng Huo 2 Dan, each with a 3-1 record. Justin Blank was the clear victor in Section B with the only other 4-0 score for the day, with Andrew Thieman and John Aiken tying for second place. The very competitive Section C produced a 3 way tie for first, with Jeremy Washburn, Ganning Xu and Bhaskar Bharath each racking up a 3-1 result. There was yet another tie for top honors in Section D between Justin Su and Russell Herman.

The following tables reflect the 4 rounds of play. The first table is a record of entries with Win/Loss records. The next 4 tables display the results from each round. This data is based on the TD file submitted to the AGA, cross checked with the wall boards from the tournament. Komi is shown as a whole number. A Komi of 7 represents a komi of 7.5, and a komi of 0 means an actual komi of 0.5. In the Rounds tables, the winner of each pairing is in bold type. In pairings with a handicap of 1 stone, the komi and handicap columns each contain a zero.